In Bergen, we began our day in the rain with a drive around the waterfront and then on to a small working farm just outside the city proper.   The farmer had four work 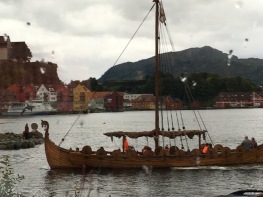 ing horses, chickens, and a dozen or so sheep. Since it was raining quite hard we didn’t wander about the farm too long, but the guide did stop to show us some of the animals 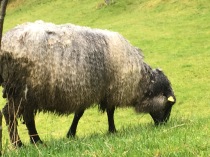 .  When was the last time you saw a barn/shed with a grass roof?  Take that a step further and ask yourself if you had that barn and some sheep would they have kept it neatly trimmed by eating it regularly? These sheep did! I watched them climb the rooftops and nibble away. Amazing.

Eventually we went inside the farm-house and had a lovely snack that include fresh-baked pastries and tea. The farmer chang

ed into traditional Norweigan clothing, along with the gals that worked the tours. They came out and did a traditional dance of us and the farmer played the piano. It was a charming morning despite the rain.

By the time we headed back for the ship the rain had stopped and we were able to walk along the wharf to see some of the old Hanseatic buildings. Having been in Bergen before, we didn’t spend a lot of time walking around.  Instead we headed for the ship to get settled in before setting sail early that evening. This was a must see city. 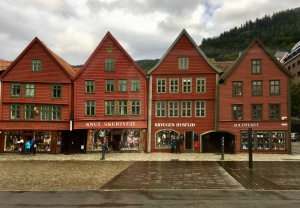