Assisi is in the Umbria region of Italy, which is lush and full of green vegetation. This is where St. Francis lived and died. In this little town there is a chapel within a Basilica which has three levels. Unfortunately, we couldn’t take any pictures inside. St. Francis is actually buried there. Inside the chapel are original frescoes which tell the story of his life.  The property itself is quite large and houses many priests. 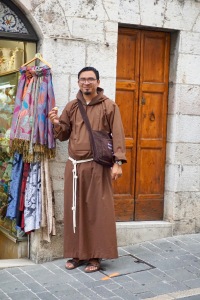 The Basilica was set among the medieval town complete with old cobblestoned and curved, narrow streets. Brick and stone buildings housed shops and private residences. Tragically while looking out at the city, I dropped my new camera and jarred the regular lens so that it didn’t work. I was able to still use the camera with the zoom lens, but had to revert to the iPhone camera for the last half of the trip.

As a side note, we took out an extended warranty on the camera when we bought it, so I was able to get it fixed with no problems. 🙂

As we traveled on we went to a museum where they had a robe and belt worn by St. Francis. I thought it was a neat thing so I took a picture. Well, this isn’t a great picture but it was incased in glass, behind more class, so a bit of a living challenge for an amateur photographer using an iPhone for a camera.